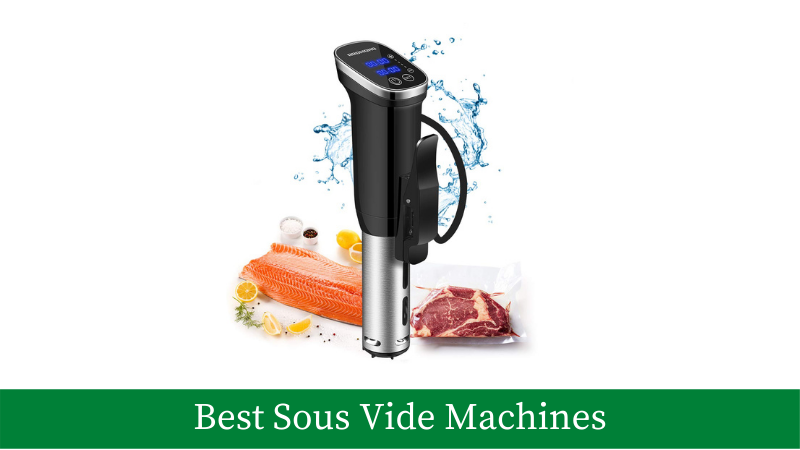 I strongly believe in the saying “The way to someone’s heart is through the stomach”. Well, I learned this pretty early in life because I can’t seem to shake off the full-flavored aroma of my grandmom’s preparations. While she always lives in my heart, a chance encounter with an amazing dish really refreshed my childhood memories of her. Later, a complimentary conversation with the chef aroused my desire to find the best Sous Vide Machines to make similar dishes at home. Though I had heard about how well Sous Vide cooking preserves the true flavor of the food, this was the first time I had actually experienced a real Sous Vide preparation.

So as I started digging into more details about Sous Vide cooking, I realized that this style is slowly moving from industrial and professional cooking to home cooking. Hence,  for the benefit of my readers, I took it upon myself to track down some of the best sous vide machines available for home use. Besides this, I will also be talking about various other aspects of this cooking style, like benefits, precautions, and buying guides, etc.

All about Sous vide cooking

While many of you must have heard about it, sous vide is relatively new for home applications. The classic definition of this method of cooking comes from its name itself – sous vide is a French word for “under vacuum”. So, as the name suggests, this method involves cooking ingredients in vacuum-sealed food-grade plastic pouches in controlled temperatures over a long period of time.

Though this long-duration-slow-heat cooking concept is not new (this was the secret of my grandmom’s palatial preparations), the vacuuming and use of water for heating can be specifically attributed to sous vide. Because of its very precise and specific preparation style, this method has been so far very successfully employed by professional chefs and the food industry to enhance product life. However, of late it has found favor with home cooks as well due to its impressive ability to preserve the freshness and flavor of food, especially meat. Seeing this demand, many manufacturers have come up with some of the best sous vide machines for home use.

However, before listing them, I wish to explain some hows and whys of sous vide cooking. So, here we go!

As mentioned earlier, slow cooking in sealed earthen pots has been around for time immemorial. For instance, slow roasting of pigs under the soil in Hawai or preparing special flavored rice in earthen pots in India. Another well know French style was using parchment paper to cover the food being cooked.

However, it is Chef George Pralus who has been credited with the discovery of sous vide cooking. He experimented with the foie gras by cooking it in a plastic pouch kept in warm water. Eventually, he realized that this technique not only preserved the flavor and freshness of food but also could enhance the shelf life of perishable foods. This discovery was later immensely used in the factory-produced frozen foods industry as well as restaurants and hotels. Hence, this has dramatically changed the ready-to-eat industry landscape.

Did You Know?
The temperature range between 40-degree F and 140-degree F is called the “Danger Zone” because of its suitability for pathogenic bacterial growth. Hence, make sure your refrigerator temperature always remains below 40°F/ 4.4°C for food safety.

The process involves creating a warm water bath in a big vessel and ensuring a controlled temperature. Now, you could either use a water oven or an immersion circulator for this, both of which I will be discussing later. Next, you need to place the food in a food-grade plastic bag and create a vacuum inside it. This is an essential step and the base of sous vide cooking because the air around food insulates it and doesn’t allow heat to pass on efficiently. Another important aspect of this step is the process of vacuuming. While you could use a vacuum sealer for it, the proposition seems complicated as well as expensive. For this reason, you could use the displacement technique or a table-edge method, both not require any expensive equipment. For further information on these techniques, you can refer to this book section.

And that’s it! You wait while it’s cooking till you get the desired results. You could serve it directly or process it further to get a crusty top. Even freezing it for future use is an option that is used by the RTE industry. For more details on pasteurization and storage guidelines, this article on safety tips is very helpful.

Of the many benefits of this cooking method, the one that appeals most to me (as a health enthusiast) its ability to preserve maximum nutrients.

And for the foodies of the world, with special taste buds, it’s the retention of flavor and freshness of the food this style provides.

Above all, for those busy-bees who believe in ready to eat philosophy, this technique certainly enhances the shelf life of the eatables.

Following are the two basic sous vide machines available for home use. Both have their own pros and cons but are equally competent to provide you the desired results.

These look like immersion rods but have temperature control ability. Because of their capability to circulate the water for an even distribution of heat they rightly get their name. These are by far the most popular of the two. Many people have already tried this, and they come away with a very strong opinion that immersion circulators are the best sous vide machines on the market. I think they are right. The immersion circulator has been tested and proven to work for many different purposes, many of which are listed in the very informative manual that comes with the package. These tests were performed on high-quality food at various points in the cooking process, including the stage when the food is removed from the pot to the moment when it’s placed back in the pot. They all came out very well.

But how does an immersion circulator work? It’s really quite simple. It heats water to a specific temperature, then brings that water to the pot. Once inside, it maintains that temperature and food will be cooked uniformly in the interior even if it’s taken outside to be warmed or brought back inside. One of the advantages of sous vide machines compared to conventional ovens or roasting pans is that because the water is heated to a specific temperature, there is no need to monitor the inner temperature constantly, making for a perfectly cooked steak, fish, vegetables, or whatever you’d like to prepare.

So, what are the advantages of using an immersion circulator instead of a more traditional sous vide machine? It’s certainly less complicated, since it heats water only, instead of the entire pot. And since there’s no need for constant monitoring of the inner temperature, it’s much less expensive than a more complex appliance. There are also some notable advantages to the immersion circulator over a more complicated sous vide machine. Some of those advantages include:

More reasonably priced than other appliances. My immersion circulator costs me just a hundred dollars, whereas my searing station and meat thermometer required me to spend about five hundred dollars. If you don’t mind paying a little bit more, you can find some very good, high-quality models that will easily perform like the reviews say they should. They’re tested and certified, so you know they’ll do their job.

They also give you the flexibility of choosing a water bath most convenient to you.

However, on the flip side, they take a long time to heat higher volumes of water. So, if you are looking at some higher temperature cooking, this might be a bit frustrating. Also, during the cooking process, water from the bath keeps evaporating constantly. Hence, you need to invariably replenish the lost water, which is quite a task.

Quick hacks: Keep your water bath covered with foil while using these. This helps with quicker heating of the water bath and saves you the trouble of constantly adding water that evaporates during the cooking process.

These look like a rice cooker with a pot and a lid. So you just fill it up with water, set the temperature, close the lid, and forget about checking repeatedly.

Firstly, this type of machine is very handy when you need higher temperatures or volumes to work with. Secondly, because of its lid, you can be sure of faster heating and minimal water loss through evaporation. As mentioned earlier, the heating process leads to constant evaporation of water from the water bath. Hence, it gets depleted over a period of time which needs to be regularly replenished. Well, not in an oven! Because of its lid, you are saved from this job! Therefore, it’s a perfect choice for those of you who do a lot of sous vide cooking.

Nevertheless, on the downside, it’s very bulky and difficult to clean. Though some people might like its look, cleaning is still a problem. Since the pot cannot be removed from the main body, you need to carry the entire piece to the sink for cleaning. Not a very convenient proposition indeed!

Faster, easier, and less complicated! A precision cooker is generally considered to be much faster and easier to use than any other sous vide device, which makes it ideal for cooks who don’t have a lot of experience with traditional cooking. The immersion circulator runs much cooler and doesn’t heat up the water to temperatures that are usually required for effective cooking. They’re also much less complicated to use, which is probably why they’re growing in popularity.

Still more affordable than stainless steel and other metal kitchen appliances. Most home sous vide machines are very reasonably priced and can fit into a number of different budgets. Because they’re so popular, many different brands and models are available at all price points. If you’re on a tight budget, you should definitely take a look at some of the newer machines that are on the market, as they can certainly provide you with high-quality meals at affordable prices. 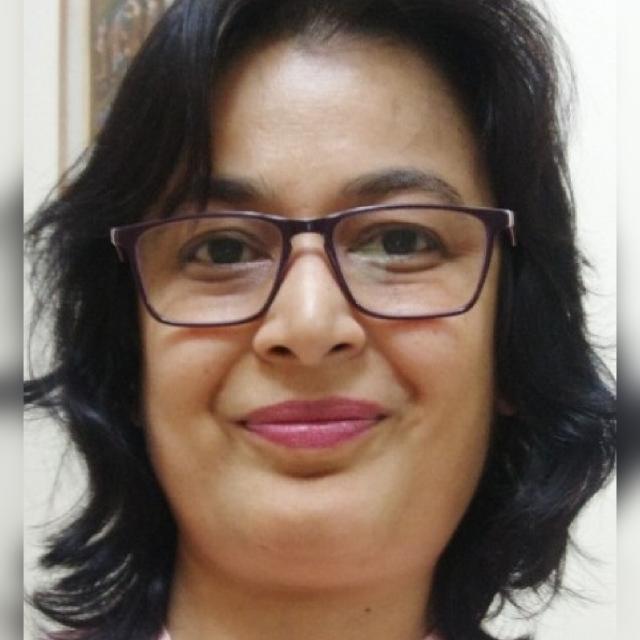 A graduate in Computer Science with post-graduation in Finance, Manisha Dhiman Kant is a stay at home mom. Having worked with multinational companies for around 10 years, she chose to work from home to balance her family commitment and work life. Since then she has written content on various areas of management, life, and technology. An avid online shopper, Manisha enjoys writing frank reviews for the benefit of other shoppers especially in kitchen gadgets and appliances category because that, she feels, is her forte (an entitlement most moms have because of having spent substantial time in the kitchen).